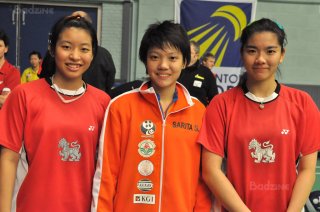 The Yonex Dutch Junior 2013 was another great tournament.We saw some great matches in a good atmosphere, and went through the 340+ matches without any major problems and delays. As usual the asian players were the ones to beat, but we had some european players who did just that. As the tournament progressed the quality of the matches got better and better, which resulted in some very good matches in the weekend. If you were not in Haarlem to watch it you sure missed something!

After the finals we congratulate Thailand on winning 3 events, and Malaysia and Germany on winning one each.

Find all the results here.