After five days of fierce competition the Malaysian team emerged as the big winners of the Yonex Dutch Junior 2011, winning·four out of the five events. Only the mixed doubles went to Hong Kong, in an all Hong Kong final. In the finals only Dutch hope Josephine Wentholt was left amongst five finalists from Malaysia, and four from Hong Kong.

In the first days of competition we saw some great matches, and the level of play just kept on improving everyday! On the finals day there were some really great matches, with unbelievable skills and fighting spirit from the players. 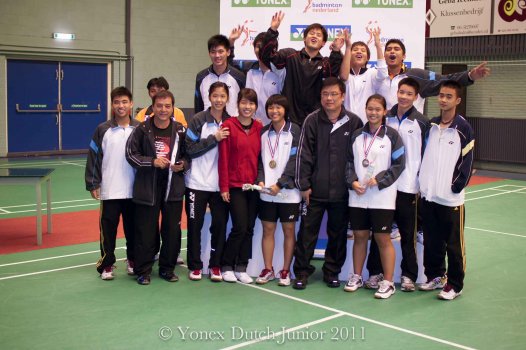 In the mixed doubles the Hong Kong pairs dominated, with Chun Hei Lee/Yik Kei Yeung (5/8) comfortably beating their compatriots Chun Hei Tam/Hui Yui Shek. The unseeded Tam/Shek were the surprise finalists after beating the first seeded Schwenger/Herttrich and the Dutch hope Middelburg/de Visch Eijbergen, whom they lost to last year.

In the men's singles Malaysian Giap Chin Goh faced Hong Kong's Ka Long Ng (who beat defending champion Toby Penty in the semi final) in the first of two Malaysia vs Hong Kong finals. It was the most exciting final of the day, and possibly the closest final ever. Giap Chin Goh proved to have the strongest nerves with a score of·26-24, 17-21, 24-22. Giap Chin Goh was the first to match point at 20-18, but Ka Long Ng saved them both, and got two himself at 210-22 and 22-21, but on the third match point Giap Chin Goh took the title. He received the award from 1992 Olympic champion Poul-Erik Hoyer Larsen. 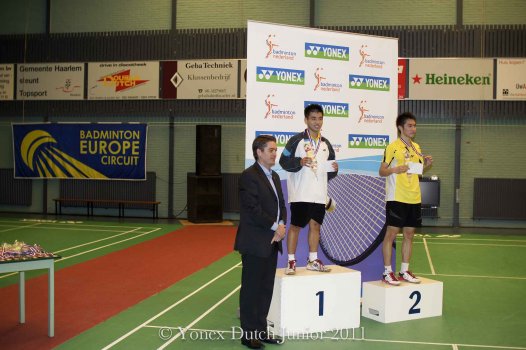 In the women's singels final the Dutch hope Josephine Wentholt played Sonia Su Ya Cheah from Malaysia. Josephine played some great matches to reach the final, beating 2008 champion Romina Gabdulina and Germany's first seed Fabienne Deprez. Sonia Su Ya Cheah staged a great come-back in her quarter final against Ngan Yi Cheung (who won the German Junior 2011) coming back from a 18-12 deficit in the third game to win it 21-19! But in the final she was never really in trouble as she was never behind in a 21-13, 21-11 win. 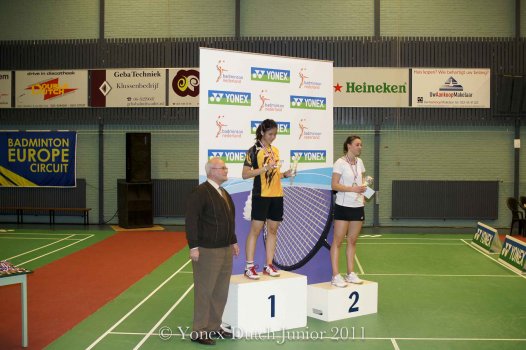 The men's double final was a pleasure to watch, even if it was an all Malaysian final. The first seeded Nelson Heg Wei Keat/Ee Yi Teo defeated the unseeded Jagdish Singh/Juan Shen Low in three marvellous sets of high quality doubles. In the semi finals they both needed three sets to defeat their opponents, but it didn't seem to have affect on their game, which got the ooo's and aaahh's going from the crowd. 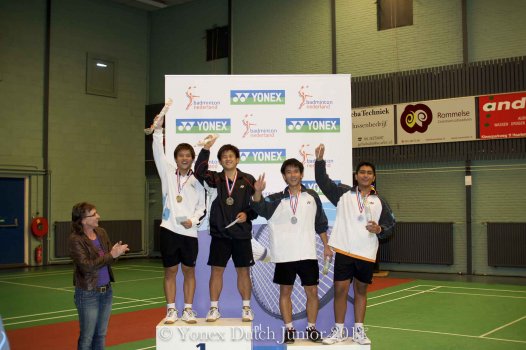 Last but not least the women's doubles final, the second Malaysia vs Hong Kong final. The Malaysian pair of Lee Meng Yean/Chow Mei Kuan (who defeated 2008 champions Chervyakova/Gabdulina in the semi finals) took the lead against Yik Kei Yeung/Ngan Yi Cheung (who defeated first seeds Cheah/Yang and dutch pair Wentholt/Peters) and never looked back in the first and in the second set, winning 21-16, 21-7. 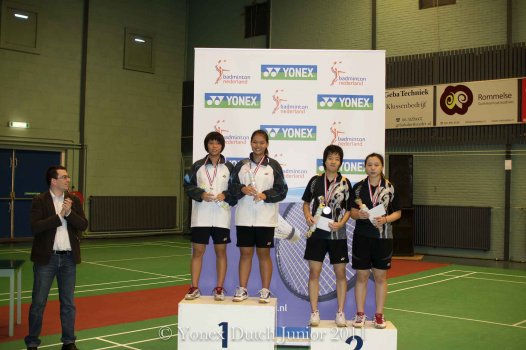 Overall we look back at another great tournament, which went to schedule, apart from some electrical problems which were solved quickly, and measures have been taken to prevent the lights going out again next year.

But the big question is who will stop the Malaysian team next year? We hope to see all countries coming back again next year, and hope to see some new (and old) countries sending teams to this event as well. If there is anything you think we can improve on, don't hesitate to let us know!